On Sunday, September 27th, the sisters began seeing a smoke plume from the Glass Fire (named for the nearby Glass Mountain). We watched this all day long, seeing it grow as the day came to a close. All night long, our phones and computers were buzzing with county and city alerts for evaucation warnings and orders. Early Monday morning, a portion of the city of Calistoga was put under mandatory evacuation, and the sisters prepared to leave, knowing that the entire city would soon have a similar order.

Thankfully, we were able to follow our evacuation plan of gathering animals, go-bags, and many religious items from the church, and driving to St. John of San Francisco Monastery in Manton, CA. The monastery has a facility large enough to house our entire community, enabling us to stay together and maintain a routine of prayer and labor. Although worried about our neighbors and the monastery, we were delighted to spend time with the brotherhood in Manton, helping them with projects and praying together the daily services.

Naturally, the Glass Fire has had a huge impact on the Napa wine industry. Many vineyards were burned, and many wineries lost tasting rooms and wine-making facilities. Thanks be to God, the local winery where Calistoga Orthodox Wines makes chalice wine was not damaged, so all our barreled wine is safe and unharmed. Our bottled wine is in storage many miles away, so we knew those cases would be unaffected. Furthermore, we had decided as far back as April that COWines would not harvest and crush in 2020 (because of lower demand during COVID), so we had no grapes to worry about suffering smoke taint or rotting during evacuation (which was what happened in 2017).

Thus, we are relieved to share with you that COWines has weathered the Glass Fire with little direct impact, other than temporariliy shutting down ordering during the evacuation. We're happy to announce that ordering is again open, so our customers may call, email, or order directly online via the website.

Thank you for your prayers and support! Back in January of 2020, few of us realized what was on the horizon. At COWines, we were coping with some administrative changes while delightedly seeing record sales numbers. Those strong sales in January, February, and early March helped buffer the inevitable decline in orders once churches began closing in March 2020. However, the winery itself never closed -- we have been and continue to be able to ship wine to any of our customers in the continental United States, thanks to the ongoing services of UPS and the Napa Valley wine industry.

We cannot escape the impact of COVID-19, though: at this point, COWines has reluctantly decided not to bottle in July 2020, nor crush at harvest time in October 2020. Our current inventory should see us through to July of 2021, our next bottling date. Foregoing a 2020 bottling and harvest saves the winery significant money at a time when our sales remain low.

You can help Calistoga Orthodox Wines by continuing to order for your church, restaurant, tasting room, or personal use. If you enjoy our wines, recommend us to your friends! Most of our new customers come to us via personal recommendations, and we are very grateful for your support both in purchasing and promoting our wines. Follow us on Facebook and Instagram, and keep checking back for more updates about the winery activities! 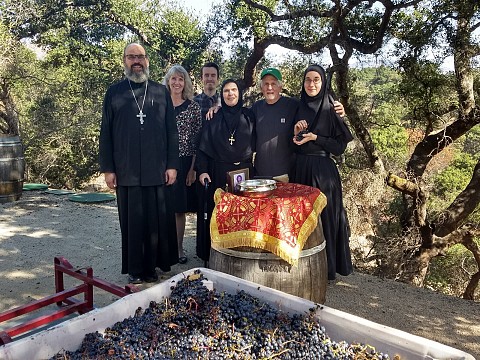 2018 Blessing of the Grapes

And not only that, but we also glory in tribulations, knowing that tribulation produces perseverance; and perseverance, character; and character, hope. Now hope does not disappoint, because the love of God has been poured out in our hearts by the Holy Spirit who was given to us. Romans 5.3-5

The azure sky, warm sun, and pristine air of October 8th provided a beautiful setting for the 2018 blessing of Malbec grapes for Calistoga Orthodox Wines. Abbess Melania of Holy Assumption Monastery (Calistoga), Archpriest Lawrence Margitich of Saint Seraphim Cathedral (Santa Rosa), and a small group of sisters and friends gathered at a local winery on Foothill Road in Calistoga. Our grapes, freshly harvested that morning in Sonoma County, were waiting for us, and Jason Gerard, our winemaker, was waiting to begin the crush.

Nothing about the lovely day or the brief service, during which we sang a portion of the Akathist “Glory to God for All Things,” gave a hint of the difficulties through which Calistoga Orthodox Wines has come since its inception in 2011. But at this time last year – almost a year ago to the very day – the Tubbs Fire was burning around the winery and through huge sections of the city of Santa Rosa. Our 2017 grapes had just been blessed the day before, and suddenly they were engulfed in smoke and abandoned as the residents of Calistoga evacuated.

Thanks be to God, both the winery and the monastery survived the fire, but our 2017 harvest was lost. Although this was a small loss compared to those who lost their lives, their homes, or livelihoods, it nevertheless posed a major challenge for Calistoga Orthodox Wines. To our dismay, we discovered that due to a filing error, the grapes at the winery had not been properly insured. While we went ahead and filed a claim, the insurance representatives thought it unlikely that we would see any compensation for the loss of the grapes.

The filing error was itself the result of a period of turmoil and change for Calistoga Orthodox Wines. The previous summer, in June of 2016, the sisters learned that our original winemaker was restructuring his business, and would no longer supervise the making of Malbec/Kagor chalice wine for us. We also learned that the co-founder of Calistoga Orthodox Wines needed to resign and disassociate from the business entirely. Thus began a desperate search for a new local winemaker (we needed to find someone before the September/October harvest), as well as the chaotic process of the sisters taking over responsibility for all aspects of the wine business (made even more complicated by the temporary absence of one of the most involved sisters, who was at seminary). In addition, the business model for Calistoga Orthodox Wines, which was dependent upon sales through our winemaker’s tasting room, collapsed: since our church sales were subsidized by the tasting room sales, the business was operating at a loss, rather than at a profit. Could COWines survive all of these changes? Could the monastery afford to continue pouring resources of time, energy, and money into a failing endeavor?

In spite of such profound doubts, we strove to save Calistoga Orthodox Wines because making chalice wine is a great privilege. The Lord planted our community in the Napa Valley, uniquely positioning us to produce an outstanding wine for use in the Divine Liturgy. What could be more profound than to participate in making the wine that, by the will of God the Father and grace of the Holy Spirit, becomes the Blood of Christ, and unites us to Him? We didn’t want to give up unless it became absolutely clear that no effort of ours could prevent the dissolution of the winery. We would accept the Lord’s will if no way forward could be found, but we could not by our own choice abandon the project.

And at every moment when the path in front of us seem impassable, the Lord opened a way. We spent an entire summer asking winemakers to work with us, with no success; then a few days before Dormition, we met a local winemaker (Jason’s employer) who had heard we were looking for help. We were overwhelmed by the sheer volume of work required to run Calistoga Orthodox Wines on our own; but the Lord sent additional sisters and friends to help manage the business. And finally, we lost the grapes in the fire, and discovered that our insurance would probably reject any claim we filed; and yet, a month later, we received notice that the insurance company would be sending us a check.

There have been, and continue to be, many, many other challenges and complications in the running of the winery business, but the winery has not collapsed. For all these reasons, the blessing of the grapes is especially important to us. We know that each vintage produced by the winery is not the product of our own expertise, but the fruit of the Lord’s blessing. We cannot survive apart from Him. We beg His mercy and grace in our lives, and thank Him for all the gifts He showers upon us; not least of which is the privilege of preparing wine for the Divine Liturgy, and partaking of that Heavenly Banquet. We hope that the offering of our chalice wine is made more acceptable to Him through the tribulations and difficulties we encounter in its preparation, as long as we accept those tribulations with patience, faith, and hope. We hope we are made more acceptable to Him as He transforms us through these experiences! May He continue to show us His goodness, both now and in the time to come.

We went through fire and water, but Thou hast brought us into a place of refreshment. Ps 66.12

Glory to Thee, O God, from age to age!

If there were a connection between making good wine and winning the lottery, some may call it luck. Others may deem it divine intervention. And for the priest of Calistoga’s Russian Orthodox Church, landing a notable winemaker to make the church’s chalice wine was practically a gift from above.

“For me, it’s better than winning the lottery,” said Father Akim Provatakis.

Noted winemaker Mark Herold agreed to make two chalice wines for Provatakis, taking the wines to another level, earning the praise of Provatakis’ peers, who said it’s the best chalice wine they’ve ever had, and delighting the taste buds of dessert wine drinkers.

Recognizing the opportunity to capitalize on his wine country location, Provatakis decided to get into the winemaking business, in part to find a small revenue source for the St. Simeon of Verhotursk Russian Orthodox Church and Holy Assumption Monastery, and in part to fill a gap in affordable chalice wine that occurred when an upstate New York producer discontinued its production of Alicante chalice wine.

Calling it a “traditional blend,” Provatakis said the Alicante chalice wine has a little bit of syrah in it. And its price point is less than half the gold-standard version, which Provatakis said many parishes can’t afford.

Where Alicante is “the workhorse wine,” malbec is “the premium chalice wine,” Provatakis said.